"...you're looking at the strongest warrior in Bora. My name's Jennifer."
-- Jennifer, Power Master 1: A Strange Journey

Jennifer (pronounced "Jeh-ni-fir") is a major character in the Power Master series, first appearing in Power Master 1: A Strange Journey. Jennifer protects her hometown from invading enemies under the alias "Warrior of Bora".

Jennifer Sophie Dyson is a girl who lives in the Town of Bora, born March 18, 1993[Reference incoming]. In Power Master 1: A Strange Journey, she is 15 years old[Reference incoming]. She is the daughter of Butch and Jill Dyson, and the older sister of Nichole. Prior to A Strange Journey, Nichole was kidnapped during a bandit raid, and Jennifer protects her hometown both so it does not happen again to anyone else and to search for her sister[1].

Jennifer is portrayed as a strong character, both physically and mentally, which can lead to her being stubborn in her decisions[2]. Jennifer gives it her all in battles and discussions, not backing down in what she believes in. However, she is known to be afraid of the dark[Reference incoming].

In the Power Master 1R Story, Jennifer fulfills her canonical role in Power Master 1: A Strange Journey, being the Warrior of Bora. She first appears in Chapter 1: Warrior of Bora, where she attacks Stephan and Andrea after finding them going through her things. After they tell Jennifer why they are there, she starts to worry about not being able to find her sister. In order to help prevent Exitilus from getting the Gems, she joins Stephan on his adventure and is with him for the rest of the story.

In Chapter 10: The Failing Flirter, she is shown to be a part of Stephan's vision, being his wife as they live in a castle and have a son named Migue. After being told this, Jennifer gets flustered and angry at being part of Stephan's vision, but warms up to the idea over time. In Chapter 11: Playing Exterminator, after falling unconscious from being poisoned, Jennifer seems to have a vision of her own, saying she saw her sister, Nichole, and that she was okay, though upset.

At the end of the story, Jennifer returns home to the Town of Bora with Stephan, where they tell her parents about her adventure. Erica also visits Jennifer's family on occasion. 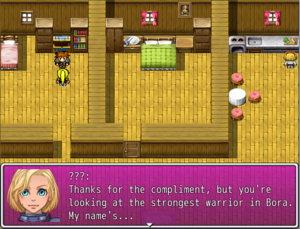 If the player is playing as Jennifer, Stephan will fill her role.

Jennifer's major asset is her Agility, which is the highest of the playable characters. She, along with Stephan, has the lowest Luck stat between the characters. Of the weapons, she cannot use axes and whips. Her skills mainly affect the enemy: Tackle can set them off balance and Confuse will confuse them. She can use Chakra to remove most Status Ailments from all players.

Jennifer learns these skills at the following levels.

Jennifer can undergo the following transformations in Doppel's Dimension:

Jennifer can fought twice in Power Master 1: A Strange Journey: once as the Warrior of Bora if the player chooses to be anyone but Jennifer at the start of the game, and again as a part of Alex's team in the Area Unknown.

To fight Alex's team, the player must find and talk to Alex in 26 different locations. Afterward, Alex will ask the player if they want to fight his team.

Name: Jennifer
Health: 1580
Attack: 750
Defense: 436
The self-proclaimed Warrior of Bora who defends her home from invading enemies. Joins with Stephan to help save the world, but not without fighting him first. (Canonical information)

Jennifer appears in Power Master: A Strange Journey MV, again as a main player character, being able to be assigned to any of the four roles the player can choose for her: "Hero", "Warrior", "Digger", and "Cousin". Upon being recruited, she will be assigned their respective class ("Legendary Descendant", "Warrior of Bora", "Digger from Uora", and "Kind Cousin"). As one of the new mechanics in Power Master: A Strange Journey MV, Jennifer can no longer learn skills by leveling up. Her design has changed slightly, now wearing a red coat and only one shoulder pad, but otherwise keeps the basic design from the original game.

Jennifer also has a personal bow and armor, which she starts with upon recruitment as an ally.

Jennifer has a 25% increase to the Health stat, which is mainly meant to differentiate her from the other Hero characters. She can equip Bows, Lances, and Shields and can wear female-oriented clothing.

If the player chooses to make Jennifer the Warrior at the start of Power Master 1: A Strange Journey, she can fought in her house in the Town of Bora if the player says they are looking for stuff. Jennifer has high Health, Agility, and Offense, and uses her bow. She can attack with Water and Quadruple Attack. She is strong against bows, but is weak to whips and Weapon Breaker parameters. When defeated, she drops a Heal-All Health Vial and reluctantly agrees to help the player.

Jennifer's development has been noted by the creator to be "complicated." While she has mostly retained her design and roles, Alex had a hard time getting her appearance down correctly. Jennifer has a "manly" look to her profile concept, Alex calls it.[3]

For this subject's gallery, see Gallery:Jennifer.