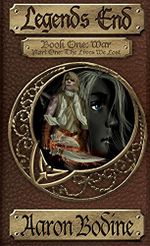 The first edition of Legends End: Part One

Legends End is a book series created by Geoffrey Bodine, who is the brother to the Power Master creator, Alexander Bodine. While the series of Legends End itself has nothing to do with the Power Master series, several characters and events have crossed over between each other.

In Power Master 1: A Strange Journey, the player characters can become characters from Legends End (Eko, Kat, Clayton, and Rona) by standing on a specific tile in Doppel's Dimension. They can also become the respective characters by naming them "LegendsEnd" when prompted.

In the Power Master 1R Story, Andrabax (the land Legends End is set in) is mentioned by Chris when everyone is trapped in Hora Headquarters in Chapter 6: Hypnock and the Time-Traveling Girl.

Legends End Book One: War, Part One: The Lives we Lost

The Mysterious Man appears to talk to Kat as she is exploring the Bandit's Market. He is mentioned once more at the end of the book when Kat enters the doorway to the Underworld. This is recalled in the next book Legends End Book One: War, Interlude One: Journal of Death.