Geoffrey Aaron Bodine (pronounced "Jeff-ree Air-in Bo-deen") is the graphic artist for Power Master 1: A Strange Journey and is Alexander Bodine's younger brother. Geoffrey also creates the Legends End series of books, and his characters appear in or been referenced throughout the Power Master series. Like Alex, Geoffrey grew up playing video games, though is more fascinated with reading stories. He usually goes by his middle name in credits.

Geoffrey, in a blue sweater and sunglasses, at Yora Yore

Geoffrey provided around half of the enemy battler graphics and the character overworld graphics. He designed the digitally drawn enemies, whereas Alex took over with drawn graphics after Geoffrey left to focus on his own work.

During Power Master 1: A Strange Journey's development, Geoffrey had a version of himself appear throughout the game. Upon the initial release, the character was removed from all locations, aside from his spectator role in Yora Yore. Geoffrey didn't mind this much saying it was Alex's game and the choice is ultimately his. The character's role in the game was very minor, saying only random pieces of dialogue unrelated to the current situation. He did have a dungeon of his own, which was removed. The dungeon was going to reappear in the 1.3 update, though that was cut itself. 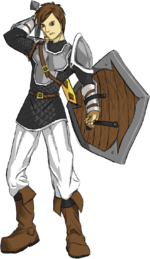 Concept of Stephan for Power Master: A Strange Journey MV drawn by Geoffrey

Geoffrey was planned to return to the Power Master games as the artist for the character artworks of Power Master: A Strange Journey MV and Power Master 2: The Legend. However, he decided to focus more on his own work, drawing concepts of Stephan, Jennifer, Hamilton, and Helen before stopping.