"I've been trying my hardest to keep this town safe, like my grandmother used to."
-- Helen, Power Master 1: A Strange Journey

Helen is a shy, timid, and sheltered character, but is kind and always willing to help if she can. When her grandmother is kidnapped, she prefers to stay behind, yet still give the player a hint about Dora Desert. She is not a very physically strong character, but is skilled with whips and magic.

Helen fulfills a similar role in the Power Master 1R Story as she does in Power Master 1: A Strange Journey. She first appears in Chapter 4: Desert Cousin, where she introduces herself as Stephan's cousin and tells the group that her grandmother, the Guardian of Dora, was kidnapped. She provides the team with a map of Dora Desert, but chooses to stay behind. After being reunited with her grandmother, Helen changes her mind and offers to go with Stephan.

In Chapter 8: Town of Trash, Helen gets stuck within the garbage when the Jora Gem started pulling trash together. After the group defeats the monster, they find Helen in the pile, having fallen unconscious from nearly being suffocated. In Chapter 10: The Failing Flirter, Stephan falls unconscious and has a vision concerning both Helen and a man named Hamilton, and Helen admits she had a similar vision in Jora. After finally finding Hamilton in Chapter 18: The Light-Headed Digger, Helen remains awkward and flustered around him, but is nonetheless happy to have him on the team.

At the end of the story, Helen returns home to be with her grandmother.

In Power Master 1: A Strange Journey, when trying to enter the Guardian of Dora's house, Helen will answer instead, claim she is the player's cousin, and say her grandmother was kidnapped and brought into the nearby Dora Desert. After defeating the person who kidnapped her and returning Dora home, Helen will ask to join the team, which the player can either accept or deny. After the endgame, Helen can be found in her house again, and the player can have her join the team once more.

If the player is already playing as Helen, Stephan will answer the door instead. 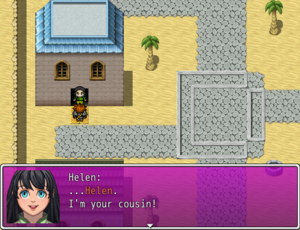 Compared to the other characters, Helen is fairly weak. She has the lowest amount of Health and is tied with Stephan for the lowest Defense. She does, however, have access to Whips, which gives her the strongest physical weapon choice at the start of the game. She cannot use swords or axes.

Helen's skills are mainly stat boosters or protectors. She's the only member who can Heal others or raise fallen allies with Raise II. Helen is the only character in the game that gets another skill (Raise II) after gaining all of the ultimate skills, and she also gains another skill (Fairy's Breath) along with them.

Helen learns these skills at the following levels.

Helen can undergo the following transformations in Doppel's Dimension:

The only time an enemy Helen is fought in Power Master 1: A Strange Journey is during the fight against the creator's team in the Area Unknown. To fight Alex's team, the player must find and talk to Alex in 26 different locations. Afterward, Alex will ask the player if they want to fight his team.

Name: Helen
Health: 1570
Attack: 750
Defense: 601
The hero's cousin from Dora. Timid and shy, but she joined the hero to help him out after her grandmother and town Guardian was returned. (Canonical information)

Helen appears in Power Master: A Strange Journey MV, again as a main player character, being able to be assigned to any of the four roles the player can choose for her: "Hero", "Warrior", "Digger", and "Cousin". Upon being recruited, she will be assigned their respective class ("Legendary Descendant", "Warrior of Bora", "Digger from Uora", and "Kind Cousin"). As one of the new mechanics in Power Master: A Strange Journey MV, Helen can no longer learn skills by leveling up. In terms of design, Helen has changed the most out of the original four characters: She now wears a short dress with black boots and gloves, though no longer wears an undershirt and pants.

As of demo 0.3.0, Helen's canonical recruitment when set as the Cousin cannot happen, as the Town of Dora has not yet been created. She will only appear in place of the other three characters when assigned to their role.

Helen also has a personal whip, shield, and armor.

Helen has a 25% increase to the Energy stat, which is mainly meant to differentiate her from the other Hero characters. She can equip Whips, Wands, and Shields and can wear female-oriented clothing.

If the player chooses to make Helen the Warrior at the start of the game, she can be fought in her house in the Town of Bora if the player says they are looking for stuff. Helen has high Health and Agility, and uses her whip. She can attack with Water and Whip Attack, and can also Defend. She is strong against whips, but is weak to bows. When defeated, she drops a Heal-All Health Vial and reluctantly agrees to help the player.

Originally, only one member was going to join the player (the Warrior of Bora). While players could still choose Helen, the role of the player's cousin was filled by a character named Alice. It wasn't until after the completion of Power Master 3's planning stages that all four members could join[2]. She originally wore a sleeve-less tank top.

For this subject's gallery, see Gallery:Helen.