Silver Knight is a character who first appears as the boss of Fora Temple in Power Master 1: A Strange Journey. Later, his rank improves to Gold Knight when the player finds him in Yora Yore.

The Silver Knight is a man clad in silver armor, later in gold armor when under the name Gold Knight. His true name remains hidden[1]. He is a very skilled fighter, capable of using many skills and weapons. According to Hunter, the Silver Knight was sent to find the hero and start them off on their journey when Hunter failed to do so himself. However, Silver Knight was reluctant to do so, as he did not believe the hero was ready for the task[2]. He was sent to Fora just to deliver the message that Exitilus has escaped[3], challenging the hero to a fight was something he wished to do himself[4]. Despite him claiming he was not expecting anyone to find him at the top of Fora Temple in Power Master 1: A Strange Journey[5], he says he was there specifically to find the hero in Power Master: A Strange Journey MV[6]. The Silver Knight is traveling the world in hopes of becoming stronger, though his true goal remains unknown for the time being[7].

He knows of the hero's origins, being descended from the Legendary Heroes of Moneo, and reveals that upon first meeting the hero. If playing as Stephan or Jennifer, he comments on how young they are, but if playing as Hamilton or Helen, he states that they have grown, implying that he has seen them before[8].

Silver Knight is the first boss of Power Master 1: A Strange Journey, being the boss at the end of the first dungeon, Fora Temple. Before letting the player have the Fora Gem, he challenges them to a fight, though claims he went easy on them after he is defeated[9]. Despite claiming to go easy, the Silver Knight is rather strong. He has a high Defense, but any magic book in the player's possession can deal significant damage. However, if the player is playing as Stephan, they cannot use magic, though Stephan can learn Strong Attack at level 5. The Silver Knight does not have any strengths or weaknesses and uses a Sword during the battle.

As Gold Knight, he just won the Yora Tournament and was rewarded one free wish from Yora's Gem upon doing so. Upon noticing the player, he uses the wish to challenge the player, this time using his full potential[10]. Gold Knight's stats have greatly improved from the last battle. He attacks with both a Sword and an Axe and knows a number of skills. Heal III recovers a large number of his Health and he can also Defend against the player's attacks. He also has access to Pierce and Ultimate Slash, skills that are granted to the player under certain conditions. Gold Knight is also strong against all physical attacks, halving damage dealt by Swords, Axes, Bows, Whips, and punching. He is also immune to being Poisoned, Petrified, Asleep, Confused, and Slowed, as well as having no weaknesses.

Silver Knight returns as the boss of Fora Temple in Power Master: A Strange Journey MV. He has a slightly different design, wielding a different sword and wearing different boots. His mouth is also visible, though a majority of his face remains hidden behind his helmet visor. Upon first meeting the Silver Knight, the player has four choices: Speak up, making a loud noise, sneaking up on him, or doing nothing. All of which have a different conversation tied to them, though sneaking up on Silver Knight will cause a battle to begin immediately.

Again, despite claiming to go easy on the hero, Silver Knight is still quite strong. His Health and Offense remain unchanged, with his Defense increased from 20 to 25. He also knows the Defend skill, which he will start using once his Health drops below half, and is now weak to Lances. Unlike other bosses in the game, the player does not get a Game Over when failing to defeat Silver Knight; instead, the Silver Knight heals them and invites them to try again when they are stronger. 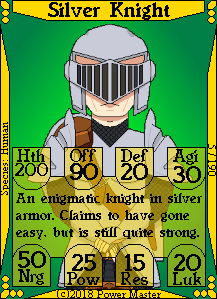