White Mage is the youngest sister of The Three Mages, appearing to be in her mid-teens, though is actually much older than that[1]. She is a cheerful, flirty, and misleading character who enjoys playing with her enemies, though seems to have an affinity for the hero. She, along with her sisters, is one of Exitilus's most trusted advisers.

Green Mage reappears on the second floor of Cora Castle, alongside her sisters. Her stats have improved and she now knows the Paralyze Breath and Tornado skills, though her strengths and weaknesses remain the same.

Name: Green Mage
Health: 110
Attack: 165
Defense: 30
The youngest of The Three Mages. Cheerful and misleading. Enjoys toying with her enemies. Seems to have a soft spot for the hero... 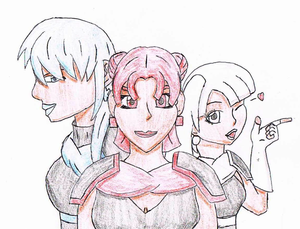 While White Mage, along with Red Mage and Blue Mage, have yet to be in any demo of Power Master: A Strange Journey MV, the three were confirmed to appear during the 2017 information trailer.[2]