Hypnock is a giant clock-like creature who is capable of hypnotizing anyone. He can also be seen in a different form, known as GrandHypnock. Hypnock's name is a portmanteau of the words "hypnotic" and "clock". He is also one of the creator's favorite characters.[1]

Hypnock is a large clock creature, with a red and white spiral design on his base and blue hands. In Power Master 1: A Strange Journey, his eyes are separate, but are part of a digital screen in Power Master: A Strange Journey MV. He hails from the Land of Shadurn, in a structure within a forest[2], and is extremely territorial, fighting for land that he believes belongs to him[3]. He does not think very highly of humans in general, often throwing insults at them such as "pathetic" and "worthless". However, he is also quite gullible, as he immediately believed Exitilus when he was told that Bora Building was built on the territory of his tribe[4]. Despite his claims, Jennifer says her father, Butch, got the approval to build Bora Building as a meeting place from several species, including Hypnock's[5].

According to Hypnock, a member of the Minonds can improve in rank after accomplishing a certain number of tasks[Reference incoming]. "Grand" is added as a prefix for a higher rank. As GrandHypnock, he has a blue and white spiral design as well as a pendulum. "Horo" is also a high prefix for Hypnock, as evident by a concept piece, but "HoroHypnock" has yet to be used in a game.

Hypnock's species is called the Minonds, with himself being from the Digital Hands Tribe[Reference incoming]. Hypnock has a magical power that can hypnotize opponents, as well as rewind time around him to heal damage.

Hypnock is the boss of Bora Building and the second boss of Power Master 1: A Strange Journey. Hypnock took over Bora Building thinking the humans had trespassed on to his land. He hypnotized the Workers in the building to keep any other trespassers out. His attacks have a Dark property, he can Confuse the player, heal himself, and is immune to getting Confused. He has no weaknesses.

GrandHypnock is the more powerful form of Hypnock and the boss of Hora Headquarters. Still set on removing the humans from his land, he is now claiming Hora is part of the land as well and challenges the player. Upon being defeated, he is convinced to return to his village leader and get more information. His skills, strengths, and weaknesses remain from his last iteration, though Heal is now Heal III.

GrandHypnock returns as a copied variant in Cora Castle, created by Exitilus's magic. He is fought in the room to the right of the entrance and defeating him unlocks the door leading the room containing a copied Phantom. He shares his moveset, strengths, and weaknesses with his counterpart.

Hypnock reappears as the boss of Bora Building in Power Master: A Strange Journey MV. Alongside hypnotizing the Workers of Bora Building, he has also been stated to steal the Bora Gem from Butch as he was using it[6]. However, it is later revealed the Hypnock did not have the Gem, instead the Mysterious Man was using it. If the player waits until after they have collected sixteen Gems before fighting Hypnock, every resident will be under Hypnock's control. If the Warrior of Bora has not already been recruited, they will join Hypnock in his fight against the player.

In battle, Hypnock has more Health, Offense, Agility, and Luck, but less Defense, than in the previous game. His confusion and heal skills are now Hypnotize and Rewind, respectively, and he is strong against being Boggled, Asleep, Confused, and Possessed. He is now weak to Bow attacks. Upon defeating Hypnock, the workers in Bora Building will be released from hypnosis. If the player fails to defeat Hypnock, the Game Over will state that the party has fallen under Hypnock's control and Bora Building has been demolished. 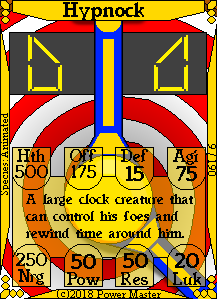