The Fairy Spring is a magical area hidden within the Land of Moneo, first seen in Power Master 1: A Strange Journey. It can be accessed by entering the trees north of Gora or southwest of Nora. 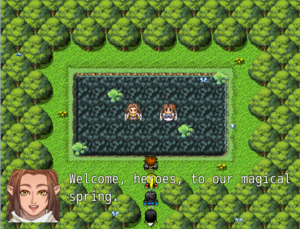 The Fairy Spring in Power Master 1

The player will be brought into a forest area first, where they can collect a Spiked Axe as well as battle a number of Swordsmen, Monsters, and Birds.

In the actual spring itself, the player will meet two fairy-like characters. They will test the player with both a Test of Body and a Test of Mind, though they won't do anything until a major task is completed. They seem to be testing the player as well, not just the player characters, as they acknowledge the player's existence, breaking the fourth wall. Completing both tests will let the player heal their wounds with every visit and the fairies will give out some words of wisdom.

The Test of Body will have the player fight the Mysterious Man, Exitilus, and Hunter all at the same time. The enemies all use their regular stats, see their respective pages for more details.

The Test of Mind will give the player several questions that they must answer truthfully by the player's standards. At the end, the fairy will determine what kind of person the player is.