"It's a Guardian's job to love and improve the world."
-- Gora, Power Master 1: A Strange Journey

The Guardians are a group of people who protect or "guard" Moneo and their corresponding Gems, first appearing in Power Master 1: A Strange Journey. They are considered brothers and sisters, though not all of them are necessarily related to each other[1]. The Guardians are a nearly-immortal group of people, some are still around since the creation of the world. They rely on the power of the Gems to stay alive well past the standard human life-cycle[2]. However, they can still be killed and can even renounce their Guardian title. It seems that when a Guardian dies or leaves, a new one is anointed in their place, if possible, as is the case of Hunter taking on the role of the Guardian of Kora after Exitilus's defeat.

After the events of the game, the player, their team, and the friends they made were made Guardians of the towns and Moneo.

The protectors of the land of Moneo. There is one is every town. Some are over a thousand years old, others are younger than that. The majority of the Guardians are boys, with the only female being Dora. They all guard the Gems from falling into the wrong hands, though one turned on them and used the Gems for his own purposes. It's up to you to gather them all and use the power to defeat the fallen Guardian... 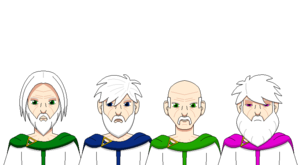 Guardians return in Power Master: A Strange Journey MV, this time with their own designs and personalities. They still dress in the same style of robes, but the colors of the robe now match the color of the Guardian's respective Gem. They are based on the concepts meant for Power Master 1R[3].