"Boy, am I glad to see someone else here."
-- Hamilton, Power Master 1: A Strange Journey

Hamilton (nicknamed "Hammy"[1]) is a major character in the Power Master series, first appearing as one of the main playable characters in Power Master 1: A Strange Journey.

Hamilton is a man who lives in the Town of Uora. In Power Master 1: A Strange Journey, he is 18-years-old. He has a younger sister named Alice, who was introduced in the Power Master 1R Story, and is good friends with the Guardian of Uora[2].

Hamilton is friendly and always willing to help others, as shown when he tries to recover the Uora Gem for Stephan before they arrive, but he has a fear of heights and often gets immobilized when confronted with even the smallest of ledges[3]. He also already knew of Stephan, claiming to be a fan of Kyle and Merlina's adventures[4]. He is also incredibly strong, with being able to dual-wield weapons being a unique ability of his in Power Master 1, and is the youngest character to have this trait in Power Master MV.

Hamilton is first mentioned in Chapter 10: The Failing Flirter as part of Stephan's vision, and later revealed in the same chapter to have been a part of Helen's vision when she fainted in Chapter 8: Town of Trash. From this point, Stephan and Helen continue to be on the lookout for Hamilton until they finally meet him in Chapter 18: The Light-Headed Digger. There, they meet his sister, and they follower her into Uora Underground to find Hamilton stuck on a ledge. After rescuing him, the team reunites with Lacey, who had stayed behind in the Town of Gora, and find she is Hamilton's and Alice's mother. Hamilton remains with the group from then on.

At the end of the story, Hamilton goes back to the Town of Uora with Alice and Lacey. 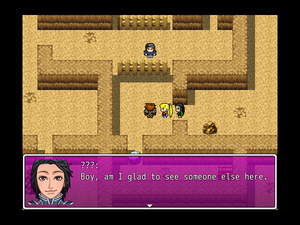 In Power Master 1: A Strange Journey, Hamilton lives alone in the Town of Uora, though he is friends with the town Guardian. He is first met in Uora Underground, stuck on a ledge and is unable to get down. To get to him, the player must blow up the boulder behind him with a Bomb to create a bridge on the lower floor. Once the player gets to Hamilton, the player can choose whether or not to let him on the team. If the player declines, he is found at his house in Uora. He is found in his house again after the endgame and will ask the player if he can join again, to which the player can accept or decline.

If the player is playing as Hamilton, Stephan fills his role instead.

Hamilton's greatest asset is his strength; he has the highest Offensive power than the rest of the characters and is able to wield two weapons at a time. However, his Agility is the lowest of them all and he cannot equip any Shields, leaving him defenseless. He also cannot equip any bows or whips.

Hamilton's skills rely mainly on helping out the team, even if it means making the enemy focus on him. He can raise his team's Defense and Offense using Restrengthen and Berserker's Roar respectively, and he can Cover other members with low Health.

Hamilton learns these skills at the following levels.

Hamilton can undergo the following transformations in Doppel's Dimension:

The only time an enemy Hamilton is fought in Power Master 1: A Strange Journey is during the fight against the creator's team in the Area Unknown. To fight Alex's team, the player must find and talk to Alex in 26 different locations. Afterward, Alex will ask the player if they want to fight his team.

The enemy Hamilton has access to all of the player Hamilton's skills as well as Pierce and he uses an Axe to attack. He is strong against Dark and Physical attacks, but weak against Light, Stone, Sword, Axe, Bow, and Whip attacks.

Name: Hamilton
Health: 1600
Attack: 665
Defense: 531
A digger from the town of Uora. Once he heard that the Moles stole his Guardian's Gem, he decided to help and expected to meet the hero and join him on his quest. (Canonical information)

Hamilton appears in the Power Master: A Strange Journey MV, again as a main player character, being able to be assigned to any of the four roles the player can choose for him: "Hero", "Warrior", "Digger", and "Cousin". Upon being recruited, he will be assigned their respective class ("Legendary Descendant", "Warrior of Bora", "Digger from Uora", and "Kind Cousin"). As one of the new mechanics in Power Master: A Strange Journey MV, Hamilton can no longer learn skills by leveling up. His appearance has been updated, but is still mostly the same: He now wears a blue t-shirt, his armor is slightly differently designed, and he gains gauntlets.

Like in the previous game, Hamilton (if set as the Digger) is found in Uora Underground's first basement floor on a ledge. When the player reaches a certain point, Hamilton will call out and a conversation will play, with it changing depending on whether Alice is in the party or not. After blowing up a boulder and reaching Hamilton, the player can choose to recruit him.

Hamilton also has a personal axe and armor, which he starts off with if recruited as an ally.

Hamilton has a 25% increase to the Offense stat, which is mainly meant to differentiate him from the other Hero characters. He can equip Axes and can wear male-oriented clothing. Hamilton can dual-wield.

After being rescued from Uora Underground, Hamilton (or anyone with his role) can be found in the following locations:

If the player chooses to make Hamilton the Warrior at the start of the game, he can fought in his house in the Town of Bora if the player says they are looking for stuff. Hamilton has high Health and Offense, and uses his axe. He can attack with Earth and can also Pierce the player's Defense. He is strong against axes, but is weak to swords and his magical capabilities are lacking. When defeated, he drops a Heal-All Health Vial and reluctantly agrees to help the player.

Hamilton is named after the last name of the creator's best friend. His original design was a grey shirt and yellow shoes, but other designs have depicted him with spikes, similar to his final design. Hamilton being left-handed was due to an drawing orientation error and him being able to wield two-weapons is a remnant of a dual-weapon-wielding mechanic.[5]

According to a concept piece, Hamilton's full name is Hamilton Spike Athio, though this has yet to be used in a game.

For this subject's gallery, see Gallery:Hamilton.