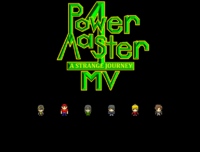 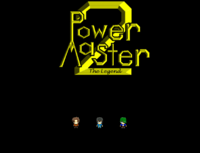 Two new Power Master games are in development! Power Master 1: A Strange Journey MV and Power Master 2: The Legend are both being developed at the same time using the RPG Maker MV engine. I don't have much done yet, as what you see in the photos is all I've got so far. But I will be hard at work creating both games anew.

For Power Master 1: A Strange Journey MV, the game will contain entirely redone sprites, two new characters, a revamped story, and different mechanics. While I think the original Power Master 1: A Strange Journey came out great, there were some things that either didn't work or look right (it had two different art styles for the enemies) or wasn't able to be implemented. If you read the Power Master 1R Story, the two new characters should at least sound familiar; the tall, muscle, red-head is Matt, who appeared in Chapter 10: The Failing Flirter, and the young, dark-haired girl is Alice, who appeared as Hamilton's sister in Chapter 18: The Light-Headed Digger. The two new characters will join Stephan, Jennifer, Hamilton, and Helen on the redone adventure. The game will use locations from the first Power Master 1, but will be reimagined using all new sprites!

For Power Master 2: The Legend, the story takes place at the start of Exitilus's reign, one thousand years before the events of A Strange Journey. The player will be the ancestors of the hero from Power Master 1 and depending on the gender of the chosen character, the story will play out differently. Kyle and Merlina were the original characters with the green-haired, broody-looking Marvin being included to help the story along.

For those of you that have sent in voice overs for the future games, I have some bad news: I have decided to cancel the use of voice overs for these games. Originally, it was just for Power Master 2, but now that Power Master 1 MV is being developed alongside it, it would be too much work for me to handle between two games. Maybe I'll bring the concept back when Power Master 3 rolls around. I am still accepting idea and music submissions, however.

Been working on the more behind-the-scenes stuff, trying to ensure that the proper mechanics of the game play out before actually moving forward to what the game looks like. Here are some of the weapons in the database and a number of the scripts that will be at work.

Power Master 1 MV and Power Master 2 will both run on the same engine, so I'm trying to develop them both at the same time. They will share the same tilesets to make it easier on me, though the mechanics and database stuff will be slightly different. 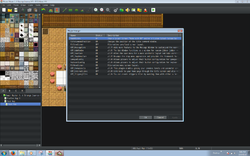 I should really be updating this more so there's an actual log here on the wikia... Anyway.

Enemies will now appear on the field! In the original game, enemies would be randomly encountered, and you couldn't tell what enemy you would end up fighting. In Power Master 1 MV and Power Master 2, enemies will move around the field and a battle will begin either when you make contact with one or if they make contact with you. This will make it much easier to find the enemy you want to fight! 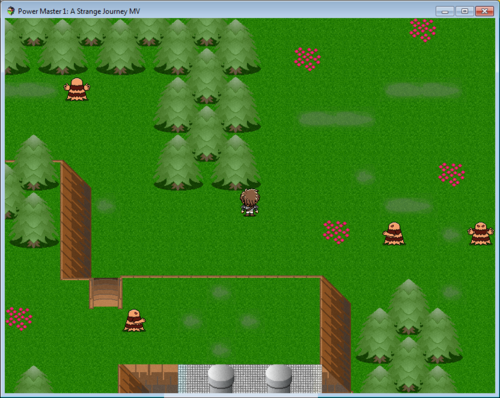 Cards return with an overhaul! Originally, you would be given a picture of the enemy followed by some text boxes. Now, it gives you all that information and more all at once! I'm not sure if I can actually make them useful in the game, but for now, they're just cool to look at :) 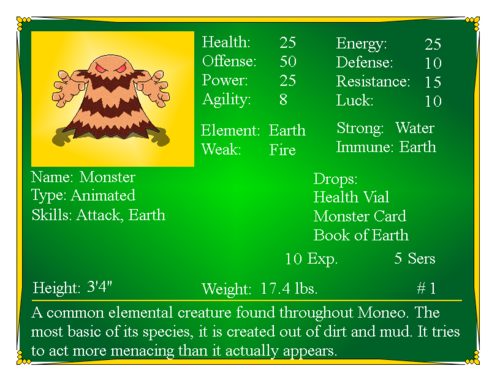