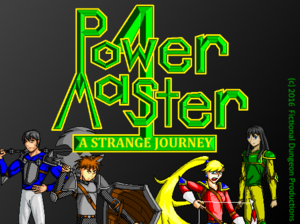 Power Master 1: A Strange Journey was released a year ago on March 18th, 2016, and I'm honestly surprised as to how well it's done. It hasn't done too well, but at over 150 downloads at the time of this writing, it hasn't done terribly either. The game was released for free on the itch.io site and I have since gotten a number of positive feedbacks for the game. I want to go over a few points that made the game how it is, and how I plan the future of Power Master to be.

First is a question I've been asked a few times: Why did I decide to release this game for free? Why not get paid for the work I put into it? There are a couple of reasons. One reason is that it was my first real project, I wasn't entirely sure how to go about the monetary process, and I wanted to see how players would react to getting a full-fledged game for free. That's a gamer's biggest dream, right? To get games for free? …Well, other than having their game actually materialize, of course. Another reason is that it wasn't entirely my own work. While I put everything together, a majority of the assets were provided by either the RPG Maker VX Ace engine or my brother. Additionally, a number of scripts were pulled from a script-sharing site, meaning several other RPG Maker developers more experienced than I had some influence with how this game turned out. I wasn't entire sure how to compensate everyone for everything, so I just… didn't. Not even myself. But hey, from what I heard, the players are happy with getting a simple and full game for free, and as a game developer, it's my job to make sure the players have fun! 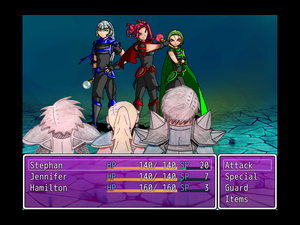 Power Master 1: A Strange Journey spent just under a year in development, first starting in April of 2015. Since then, the game had some ups and downs during development. Some things I was able to get to work, like the Mega Monster appearing after collecting all ten Logs. Some things I had to adjust, like the Aqualung was originally a suit of armor you had to wear. And some things had to be cut entirely, like Xora Xylophone. Also during development, my brother was working on both the enemy sprites for Power Master 1 and writing his own Legends End story. About halfway through designing the enemies, he decided to devote his entire focus on writing his story. And I'm glad he did, cause, not only did him leaving the team help better my drawing skills (slightly), his book came out very well done and has received many positive reviews as well. So… that explains why there are two different art styles used for the enemies. The last one he did was Pam, so I picked up from Violet onward.

While Power Master 1 spent under a year being developed for the RPG Maker VX Ace engine, it spent even longer during the concept phase: eight years. It spent eight years on notebooks and drawing pads before it finally made its way to screens. That's a long time! Not only was I trying to better how Power Master 1 came to be during the eight years of concepts and one year of development, but during that time frame, I also drew out concepts of Power Master 2: The Legend, Power Master 3, and Power Master 4, along with various other ideas I have yet to assign to a game. I remember showing my completed concept of Power Master 1: A Strange Journey to my family and friends and getting a lot of praise for it. 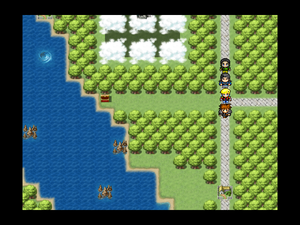 RPG Maker VX Ace could only support distribution to Windows systems (as far as I know), but the new program I later bought, RPG Maker MV, can distribute to Windows, Mac, iOS, Android, Steam, and anything HTML5 compatible, like Nintendo's Wii U and hopefully the Nintendo Switch as well. With Power Master 1: A Strange Journey MV and Power Master 2: The Legend both being developed using the MV program, a wider array of options are available to me. While the original PM1 used premade sprites and other assets, I'm redoing everything for the upcoming titles myself. Once I have the first area of PM1MV finished, I'll release a demo of it, similar to how I did with Power Master 1: A Strange Journey.

With all my health issues, video games became an outlet for me. I've spent my life playing and designing games, well before I even started envisioning Power Master. I made concepts for Mario, Zelda, Pokémon, and Fire Emblem based games, absolutely none of which I see being made into a full game anytime soon. But I used some of the concepts from those games as I made Power Master 1: A Strange Journey. For my Mario game, Mario and a team of characters had to go through levels to recover all-powerful gems. Sound familiar? So, I suppose even though I wasn't making Power Master directly, I was building the foundation for it. 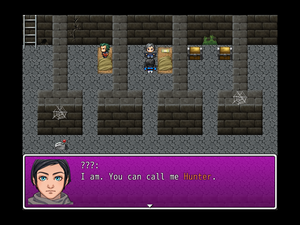 How well do I think Power Master 1: A Strange Journey did myself? I think it did all right. It was very basic and had a number of issues (like a game crashing error upon release), but it had a lot of ideas shoved into it and many people liked it. While my dream is to create a successful game and get it onto a Nintendo platform, that will have wait a bit longer. I can't tell exactly how many people have played the game, or if they downloaded it and only played the first area or none at all. But for now, I have created and started something many people have played and supported. I didn't expect Power Master 1: A Strange Journey to be successful, considering the amount of problems it had, but it has done better than I expected. With a remake and a prequel on the way, as well as additional games I have planned but yet to start, I can see Power Master becoming huge.

It just may take me a while to get there.