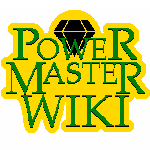 Welcome to the Power Master Wiki!

The Power Master Wiki is a wiki about the Power Master series of video games. Being a wiki, anyone can create an account and start contributing. The wiki was first launched in 2016, being hosted on Wikia, before moving to Gamepedia in June 2017. Upon learning of Gamepedia's buyout by Wikia, the wiki was moved to Grifkuba's server on February 14, 2019. The move to Grifkuba is the best choice possible, as Alexander Bodine (the creator of the wiki and the game series) works with the Grifkuba community and he is closely associated with follow hosted wikis, including Lylat Wiki, WiKirby, Fire Emblem Wiki, Rare Wiki, and JiggyWikki.

Unlike most other wikis, which are usually a fan community based around an existing franchise, the Power Master Wiki is meant to keep Alex's ideas in a collective area while also meant to provide information people may want about his games, and for others to help keep his ideas straight. Because the wiki and games are both created by the same person, there's no real legal issues involved. He only asks that no one copies his work and/or claims it as their own, whether it be the games or wiki content.

Thanks to the Grifkuba community for providing their services, and to PowerMasterRMV (talk - contributions) for helping with transferring content!

Also, the wiki contains spoilers about the games, even containing information that a game has yet to use. Read carefully!